What a great way to kick of the Christmas holidays. Literally just got back from watching The Bear at Norden Farm in Maidenhead and wow! not what I was expecting at all. 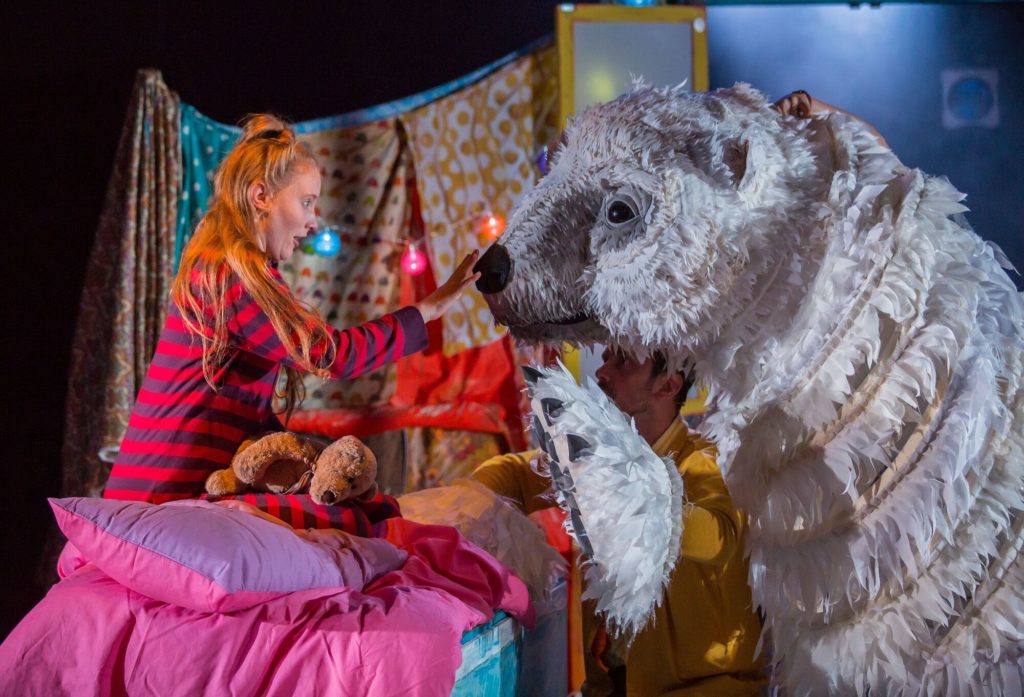 The Bear At Norden Farm

As soon as I got the email inviting us to review The Bear at Norden Farm I jumped at the chance. After mine and Clark’s recent visit to the Mill Arts centre to see Jack and the beanstalk I knew he would enjoy it at least. The bear is aimed for the age 3 and up so it would be a great way to introduce Elliot (aka Satan) to theatre.

Took us around 45mins from Bicester to get to Norden farm. We’ve never been before and I was starting to panic especially after all our more recent shit Christmas experiences. Was this going to be another shit one to add to the list? 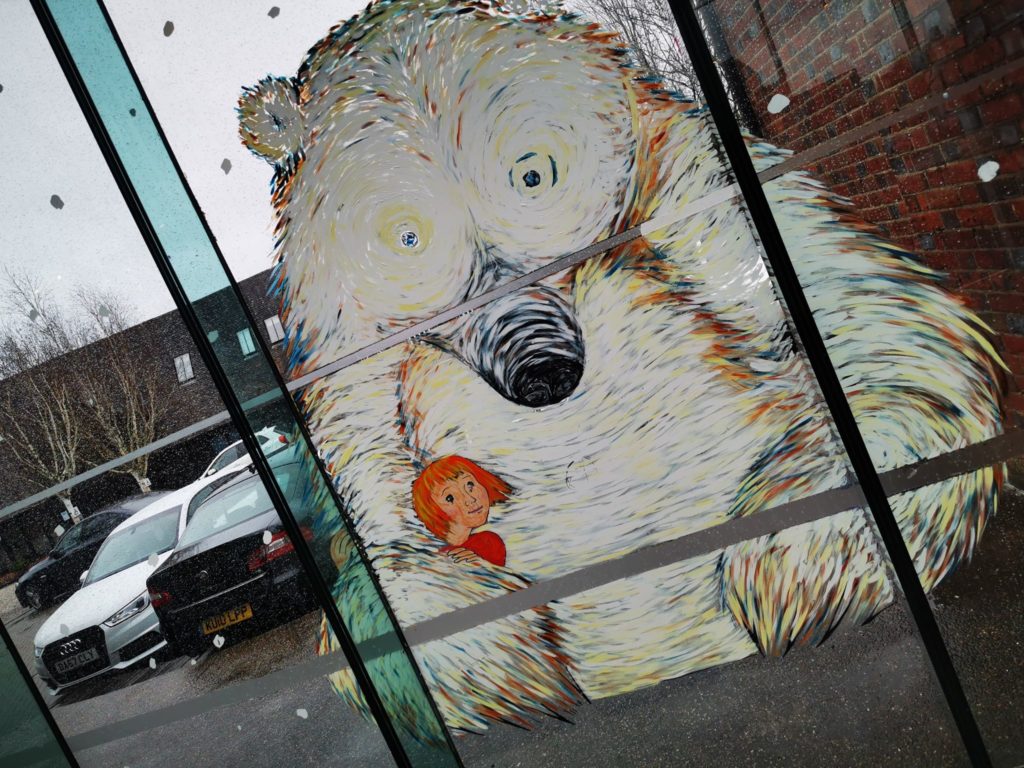 We arrived at a good time because the car parks not huge. Found a spot and off we trotted. The building is a nice looking place. Not typically theatre like. We grabbed our tickets from the box office and headed to the cafe/bar for a drink before heading in.

The cafe is really nice looking and if we lived a bit closer it would be a great place for lunch. However we were restricted on time (so the bar lady told us) so we couldn’t really order much. I did manage to inhale an awesome muffin though. I had planned to share it with the kids but change my mind. Haha off you fuck kids.

Whats The Bear At Norden Farm All About?

The play is based on the book which is called the bear (funny that). Its by the same author of the snowman. If you don’t know the snowman you’re dead to me. I had a quick read up and i saw a few photos. When I saw the word Puppet I was half expecting an actors hand to be shoved up the arse of a polar bear…..How very wrong I was.

The polar bear was massive and very impressive. The kids first reactions were a bit shocked. Elliot’s first words “Mummy where are his legs” he could quite understand why there were 2 actors acting as polar bear legs. I get what he meant and at first it is a bit strange but once the story gets going the imagination kicks in. 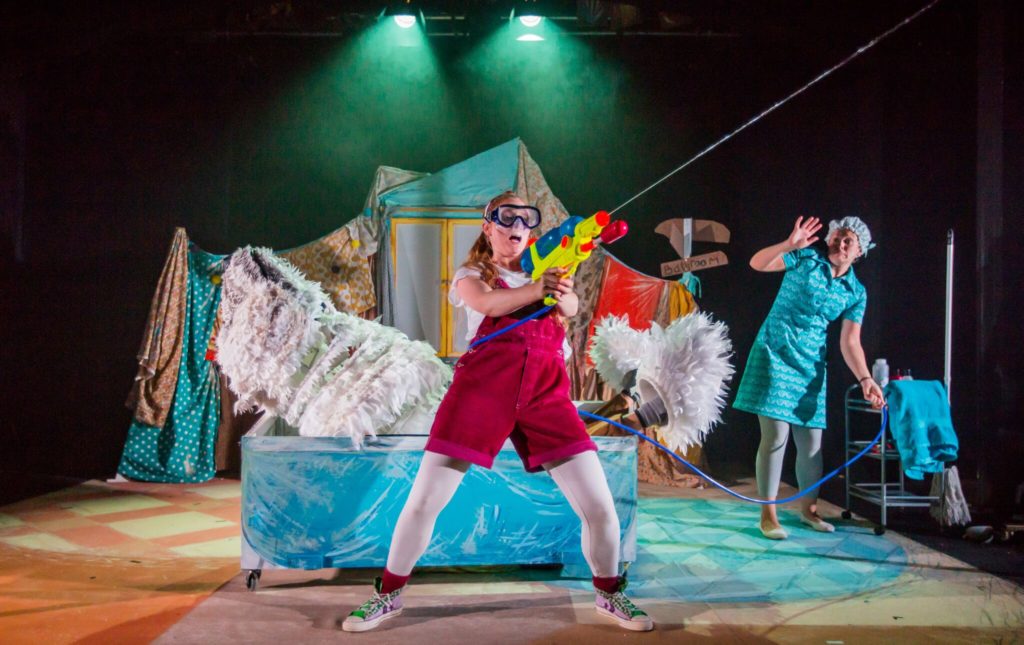 Apart from having the worlds tallest woman come and plonk herself in front of me the whole experience was magical. The kids were smiling from the off and laughing out loud . It did get a bit hairy half way through when Elliot had a mini shit fit because he couldn’t go for a stroll but apart from than and Clarks needing a pee about 15 mins from the end it went surprisingly well. Especially considering i was expecting Armageddon.

Is There Enough To Keep Them Entertained?

If you do decide to go and watch the bear at Norden farm then expect a roller coaster of emotions from your kids. One min they were scared, next they were laughing and then they were feeling sad for the little girl. This to me was a sign of how enthralled they were with the whole show.

There were lots of extra interactive parts for the audience too. Including the typical screaming of “He’s behind you”. Bubbles, disco lights, Snow and even a water gun where I got a face full. Little tip the interactive parts don’t reach the back seats. So if you can try and get seats in the first 4/5 rows. 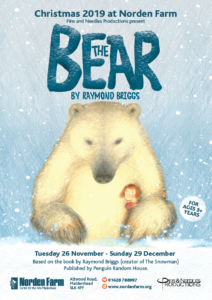 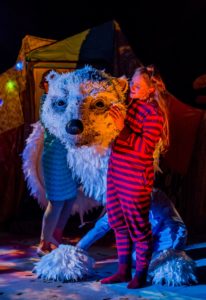 Once the show was over we had to peg it to the loos before Clark peed himself. There were a few little bits to buy when you leave from the teddy, sweets and the book. I couldn’t resist a quick purchase so i bought the book for the boys. Its super cute too.

We unfortunately didn’t stick around for long afterwards as we had places to be but having a nose around it looks like Norden Farm has lots of places to explore including a gallery.

If you have small children or children that you worry wont be able to last through a full Panto then The Bear At Norden Farm is without a shadow of a doubt the best option for you.

From the moment We took our seats to the moment we left the boys were in awe of the clever staging, costumes, interaction and most of all the story line. The Bear himself was a work of art. The kids soon got over his lack of legs and let their imagination run away with them. 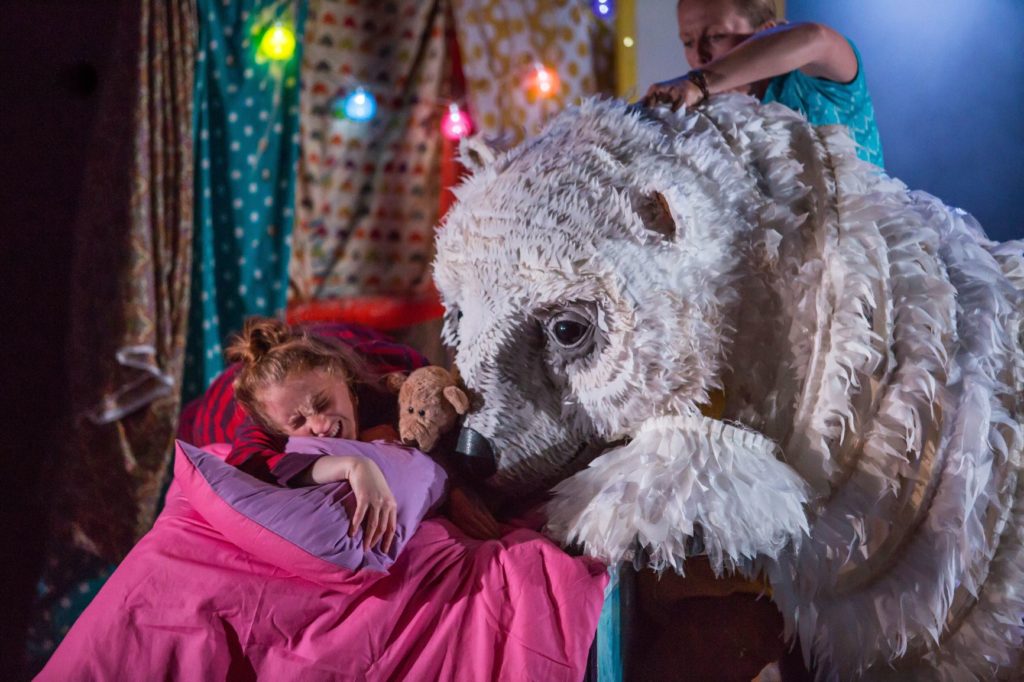 I was so glad the kids behaved and i was Impressed with the amount of children behaving. In fact i don’t think there was one child that i noticed (apart from a brief encounter with my own satan) that wasn’t sat down nicely.

We will 100% be doing more theatre Clark does much better with plays that he does in the cinema too. I must admit I’d say me and the husbeast enjoyed it as much at the kids. In fact the husbeast even passed comment “Very cleverly done” so they must have done something right to impress that miserable shit.